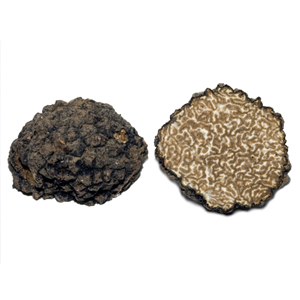 The Burgundy truffle (Tuber aestivum var. uncinatum Chatin) is very similar to the summer truffle, but grows at a different time of year. Its skin ranges from very dark brown to black, with small warts. It is harvested from 1 October to 15 March.

Its flesh varies from hazel to brown in colour, with extremely ramified pale whitish veins. It is much appreciated for its intense aroma, which is much more marked than that of the summer truffle, and it is used to flavour numerous dishes. The world's finest chefs often serve it fresh in dishes able to exalt its characteristic flavour.

Like the summer truffle, it tends to grow beneath deciduous trees in terrain rich in humus. In fact, direct sunlight prevents it from ripening properly. The Burgundy truffle needs clayey, water-rich soil and favours trees such as the hornbeam and downy oak, which satisfy its nutritional requirements. Its scientific name uncinatum derives from the Latin term uncinatus [hooked] due to the particular shape of its spores, characterised by membranes that, when observed under the microscope, reveal small hook-like filaments.