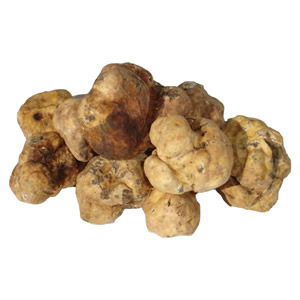 The spring white truffle (Tuber borchii Vitt.) has a smooth, pale skin, which ranges in colour from ochre to dark orange depending on its ripeness and the terrain in which it is harvested. The flesh, on the other hand, is pale, with whitish veins when it is young and more reddish veins as it ripens. Unlike other types of truffle, its skin is fairly smooth.

The spring white truffle is harvested and sold from 15 January to 15 April. It is often used to flavour broths and traditional meat and fish dishes. Its strong aroma is reminiscent of garlic and, like garlic, it can sometimes be difficult to digest despite its organoleptic properties. Its garlicky aroma is not released until a few minutes after it is has been cut, initially resembling that of the more highly prized truffle varieties.

This truffle favours coastal and maritime regions, growing in pinewoods and acidic sandy ground, as well as more mountainous areas up to 1000 metres above sea level, where it can be found under pines and downy oaks, beeches and poplars. The spring white truffle is less sought-after and more affordable than the more celebrated varieties such as the white truffle and the black Périgord truffle. However, despite its accessible price, it can turn the simplest of dishes into something truly special thanks to its characteristic aroma, which can even transform homely salads or broths into something exquisite.