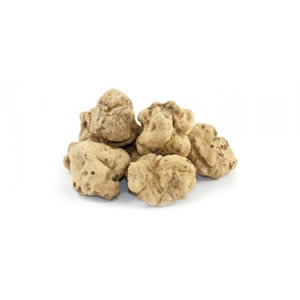 The prized white truffle (Tuber magnatum Pico), also known as the white Italian truffle, is characterised by its golden skin, sometimes tending to ochre, and its highly irregular, slightly flattened shape. This is undoubtedly the most sought-after of all truffle varieties, not just because of its marked and characteristic flavour, but also because it is a wild truffle that cannot be cultivated.

The internal colour of the flesh (the technical term is 'gleba') takes on marble-like hues that range from pale yellow to red or hazel, varying according to the trees beneath which the truffles grow. In fact, truffles draw nutrition from the trees and exploit the life cycle of the plants, particularly the roots, to extract the substances they need.

The white truffle is harvested and sold from 1 October to 31 December. Each region in Italy where this precious product grows has its own white truffle season, ensuring that it is always harvested at its very peak, when the flesh is firm and scented and the truffle has reached a sufficiently large size.

The prized white truffle grows wild at any altitude. It favours slightly chalky ground, characterised by wet springs and summers, and grows particularly well in airy spots, fed by rivers and watercourses, from which it draws many of the nutritional substances that contribute to the unique aromatic flavour that makes it so popular with chefs from the world's top restaurants. The addition of white truffle makes a dish very special thanks to its unmistakable aroma. It is particularly suited to traditional pasta and rice dishes and its flavour is enhanced by simplicity.